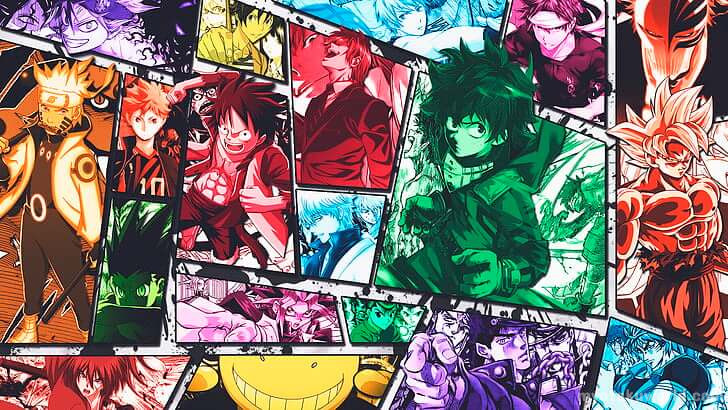 If there’s one guilty pleasure for all anime lovers, it’s a passion for crossovers.

The purists of anime might not acknowledge it, but there are few things as exciting as the sight of three or more anime characters sharing some much-deserved screen time.

Unfortunately, crossovers haven’t been as prevalent in the most popular series in recent years.

But, in the course of anime’s long history, there have been plenty of excellent films in this difficult genre.

There are also some noteworthy lately, and these, together with the older and gold crossovers that came out before, are the primary features of the list today.

These are the top 12 crossover animes!

Yu-Gi-Oh!: Bonds Beyond Time is the ultimate cross-over film that brings together Yugi and Yusei Furdou with Yuki Judai.

They are required to travel through time and unite to defeat a villain called Paradox that causes chaos across the entire timeline by hopping between periods.

If you’ve been watching the ” Yu-Gi-Oh! series since its start, this movie is sure to bring back some nostalgia, with the return of one of the fans’ beloved Yugi Mutou.

Beyond that, the film is an intriguing time travel tale that will keep you entertained throughout the duration.

It is a must-see for all ‘Yu-GiOh!’ fanatics!

The final episode of the 3 seasons of the show includes an attack in which all our heroes are confronted by the forces of evil.

The heroes from the five Digimon series come together to save the main characters of the show.

Each of them has special abilities, and a famous conflict between evil and good is fought.

Since ‘ Devilman Crybaby is available streaming on Netflix This latest crossover may attract the interest of a lot of anime lovers.

The special three-episode OVA includes Cyborg 009 as well as Devilman as characters from past anime.

However, the creators created this OVA after they realized that they were able to fulfill the expectations of their fans by delivering quality action scenes.

Although the plot told in the OVA is mediocre, the studio’s dedication is evident through the crisp and clear images.

I would not suggest this crossover to anyone who doesn’t know the characters from the two comics since it doesn’t attempt to introduce or expand these characters.

If you’re a lover of comics and the original series, this crossover is worth checking out.

‘Grendizer, Getter Robo G, Great Mazinger: Kessen! Daikaijuu!’ is an extremely old-fashioned anime film, and you’re probably learning of it only for the very first time.

There was a time that mecha was the dominant force of anime, with iconic robots such as Grendizer, Getter Robo G, and Great Mazinger.

In this film three of the heroes fight the regenerative giant known as Dragosaurus.

Despite being among the strongest robots ever seen in the anime world, battling this massive monster proves to be a tough stroll in the park for the three heroes.

In terms of crossovers, this film is the usual mecha action where the main characters are beaten up like ragdolls until they can create a plan to take on an evil antagonist.

In terms of the visual aspect, for an anime that was released in the 70s, its action sequences are fluid, but they do possess a vintage look.

In the end, you can still enjoy this anime if you’re looking for a subtle introduction to the entire UFO Robo Grendizer series.

In honor of the legendary anime artist Osamu Tezuka, “Ravex in Tezuka World” is an 18-minute short film that was included in an album by the Japanese band Raven.

The film celebrates Osamu’s “would-be” anniversary by presenting some of Tezuka’s works, such as Black Jack and ‘Astro Boy.

This crossover takes us back in time to the beginnings of anime, proving that anime wouldn’t be the way it is today without the contributions of Osamu Tezuka.

This crossover is a “return” story where the space-bound boy strays into space, only to be saved by the trio of Raven.

The space boy is later resurrected with the help of “Space Jack” and given a brand new name.

This is followed by a mini thrilling adventure in which many characters like Shinichi Osawa The Princess Knight as well as Rock Holmes return.

Alongside many of the classic characters, the movie also features music from famous artists such as BoA, Maki Goto, Anna Tsuchiya, Tohoshinki, and TRF.

This kind of crossover might not appeal to the current generation of anime fans.

For those who’ve lived through the golden age of anime, when it was only beginning to become the dominant force in animation, this show is sure to bring back several happy memories.

Produced by Ufotable, “Anime Tenchou and Touhou Project” is another one-episode show that focuses on the characters from “Anime Tchou” as well as the doujin game franchise, the “Touhou Project.”

While this crossover was loved by the small number of viewers who were able to enjoy it, due to the limited availability in Japan it’s difficult to find in the present.

The fact that it combines characters with a variety of characters warrants inclusion in this listing.

‘Inuyasha’ is an old-fashioned anime that is appreciated by a variety of generations to this day.

In honor of the mangaka Rumiko Takahashi who wrote ‘Inuyasha the manga’s first chapter, Shounen Jump created a crossover of some of her finest work in 2008.

“It’s a Rumic World the 50th Anniversary of The Weekly Shonen Sunday’ is nothing other than a one-episode saga that brings together the characters from ‘ Urusei Yatsura’ and ‘Ranma 1/2’ and the manga ‘Inuyasha’.

Despite its incredibly short runtime and the small number of interactions, the characters are funny and important enough to make this an unforgettable crossover.

The thing that makes this crossover distinct from others is how its characters break through the fourth wall.

Inuyasha and Ranma can see that they are alike, and other characters such as Kagome or Lum directly speak to the viewers.

Type-Moon The gaming firm behind the well-known “Fate” visual novel series was fortunate enough to receive some additional funds.

Using it, the company chose to develop a humorous, gag-filled crossover that combines most of their well-known characters.

Although it is extremely messy due to its large number of characters, the show is surprisingly captivating.

You get this odd satisfaction when you see your favorite character from Fate/Stay’ Tsukihime, ‘Fate/Stay’ and Blood’ in scenes that aren’t in any way related to the events they experience in their respective shows.

It’s quite surprising to observe the characters from three extremely serious series, and it provides viewers with a new view of their characters.

The show is to us from Clamp Studio, the creator of anime shows such as ‘ Cardcaptor Sakura’and “Magic Knight Rayearth,” and “X/1999,”

The show can combine elements from all the universes to reinvent a fresh fantasy-themed drama.

The basic plot is based on Sakura, a princess from the kingdom of Clow who loses all of her memories following an incident.

She must depend on her childhood friend, Syaoran, to bring them back and help her to save her soul.

Overall, the show has been a hit with both critics and fans and they praised the storyline which features all of the most well-known characters.

Hiro Hashima, a mangaka of several well-known anime series, has been known for establishing connections between his unique works.

For a long time, it was suggested that he link two of his most famous works, “Fairy Tail” and “Rave Master,” in numerous ways.

In 2013 the principal characters of both series got some screen time in an OVA.

With an incredible pace and cast of characters, ‘Fairy Tale Rave’ is an epic fight between two of our favorite Shounen characters, Natsu and Haru.

One thing that makes this OVA more thrilling is the inclusion of fantastic characters like Lucy, Elie, and Ezra.

If you’ve been an avid fan of Hiro Hashima’s work, this single-episode crossover will bring you on a memorable journey down memory lane.

Like you’d expect from the title” Lupin III and Detective Conan: The Movie is an action-packed battle of cats and mice played between our beloved criminal Lupin III as well as the adorable young genius detective of the world of anime, Detective Conan.

This movie is a must-see that fans love from the two series, and even if it’s not either of them yet, you’ll have fun watching the film.

The plot is fairly basic and centers around the idea of Lupin III, the uncatchable criminal, who is paired with the legendary detective who has a flawless track record of solving each crime.

In 2 days following the film’s release, it could have earned more than six million dollars in Japan and was an instant success.

Several other anime films featuring Detective Conan have also done very well, but this did not disappoint and was a huge hit both commercially and critically.

It doesn’t matter if you’re acquainted with the shows, it’s the kind of crossover movie you shouldn’t miss.

The Dream 9 Toriko, One Piece, and Dragon Ball Z Super Collaboration Special is a dream that has come true for any Shounen fan.

However, as overwhelming as it might be, many fans were worried about whether an anime crossover of this magnitude would succeed or not.

The surprising thing is that this mini-series managed to be a success in every way and was way over and above everyone’s expectations.

Instead of pursuing a simple method where Goku, Luffy, and Toriko can work together in pursuit of a common goal, the show features three fantastic characters competing against each other for possession of their hands on the Carat Sizzled Cattle, an extremely rare piece of meat.

There is no doubt that Shounen enthusiasts have a massive craving for thrilling battle scenes, especially those who love the three characters that are featured in this cross-over.

The action choreography as well as the high quality of this miniseries exceed the expectations of all those avid shounen fans.

Beyond that, the third part of the show becomes more entertaining when the three characters join forces to take on a common foe.

What else can you expect from a crossover anime?

Thus, this is where the collection of our top 12 anime crossovers is over.

Naturally, if other interesting crossovers spring to mind, do not forget to comment on them below.