As you probably know if you are a regular reader on MOW we have covered many hair colors in past like blue hair, Black hair, Purple Hair and all the rainbow head colors and today we are going with red heads anime girls.

Without wasting any more time lets explore this list of anime girls with red hairs.

15. Shana from Shakugan no Shana

Shana is a young anime girls with red hair which is almost as long as her body. She has an anime antenna hair (アホ毛 ahoge?) which always sticks out on the top of her head.

Upon invoking her powers as a Flame Haze, her hair and eyes change color to a fiery crimson with embers fluttering from her head down. Shana is described as pretty and of Asian descent.

She also has dark brown irises and a fair complexion. Due to the effects of being a Flame Haze, Shana’s physical age will remain that of a girl that appears to be around 11 or 12 years of age.

Kushina was a woman well-known for her beauty. She had a slender, but feminine build, fair skin, violet eyes, and she was an anime girls with red hair — a common trait among the members of the Uzumaki clan — with strands that framed both sides of her face and a black clip that parts her hair to the left, keeping it out of her eyes.

She generally wore the same outfit consisting of a high-collared, sleeveless blouse under a long, loose-fitting dress. The blouses have been depicted in slate blue as well as white while the dresses have ranged from tan to green.

Maki has the qualities of a tsundere, and she has a hard time admitting her true feelings to her peers. She also has somewhat childish beliefs which are undoubtedly reflections on her somewhat sheltered upbringing.

One such example is her uninterrupted belief in Santa Claus, which the rest of the group finds out about while together. Maki continues on to describe (somewhat proudly) how she cleans the chimney for Santa, and how he never misses her house.

Nico attempts to disillusion her, but is held back by other members who did not want to ruin Maki’s belief.

Ranma has a strong, athletic body forged from constant training since childhood. Ranma’s female form is diminished in pure strength, but is much more agile. His female form is also depicted to be very attractive, which he discreetly takes pride in and often uses to his advantage.

According to Dr. Tofu’s mother, girl-Ranma has the ideal female form and was her top candidate to marry her son.

It has been revealed more than once that the female form has a larger bust size and smaller waist size than Akane, which has infuriated the latter whenever Ranma has pointed it out

Chiyo is a short high school student with medium-length orange hair along with purple eyes. She is always wearing her signature pair of red bows with white polka dots on both sides of her head.

Chiyo is most commonly seen in her school uniform which consists of a white blouse, a ribbon, and a grey blazer on top and a short navy blue skirt with black over-knee socks and brown school loafers, she’s considered to be a cute woman.

Even though Chiyo is in her second year and should be wearing a red uniform ribbon, hers is blue instead which is a third year color. Her ribbon is her personal blue ribbon, which is bigger than the usual ribbons.

Miia has long bright red hair and amber eyes, with slitted snake pupils. Her ears are large, pointy and red, and she has fangs and a long tongue.

She also has small scales on her cheeks and wears a yellow ‘D’ clip on each side of her head (from the front the clips resemble a snake’s eyes while her hair acts as the fangs).

She also has large breasts and a curvy figure (upper body-half) Her most noticeable physical trait is her long, red snake tail. Her full length is said to be 8 meters (26 feet), suggesting her tail is approximately 7 meters (22 feet) long

Yoko is known primarily for her has thigh-length red hair that she commonly ties in a ponytail with bangs hanging on the right side, large amber eyes, a voluptuous yet slender frame and a partially covered large bust that was present even from a young age.

Even seven years after the fall of Tepplin, Yoko’s physical features fully develop and the young, more roundish facial structure she maintained as a young teenager mature into that of a woman’s.

Lisara is most known for her sexy looks and being an anime girls with red hair and eyes. She has a slim body and she wears stockings.

Lisara as described by her friends as self-centered and likes to talk down among people. She is straightforward, somewhat aggressive, and very fiery.

She is also quite mean to Ryosuke but due to jealousy, her behavior starts to change.

Erza is a young anime girls with red hair and brown eyes. She lost her right eye as a child and now has an artificial one which was created by Porlyusica.

She has a slender, voluptuous figure that Lucy Heartfilia described as “amazing.” Her most common attire consists of a custom-made armor by Heart Kreuz smiths, a blue skirt, black boots, and diamond shaped silver earrings.

Her Fairy Tail stamp is blue and is located on the middle of her left upper arm.

6. Stephanie Dora from No Game No Life

Stephanie is an Imanity anime girls with red hair that is decorated with a large blue flower. She has blue eyes and a curvy figure with rather large breasts, and a dress by Sora that made Idols to be jealous.

She wears a shoulder-less cardigan with a maid-like dress and a pair of leg warmers and boots. In Episode 1, she wore this elegant dress given to her by her grandfather.

However, after losing it to Chlammy, she had to wear a towel before being dressed by Sora in a dress made from a bedsheet.

Once the siblings beat Chlammy in a game for the crown of Imanity, Steph regained the dress and has become the main staple for her clothing. Her three sizes are from above, 89, 58, 89.

Lilith is a young woman and an anime girls with red hair that reaches down her waist, styled normally with a single strand of her bangs braided, as well as the sides of her hair pulled back and held together with a small basic clip.

She is also particularly known for having a very well developed and curvaceous figure. Furthermore, Lilith is rarely never seen without her dark beret, with a few exceptions depending on the situation.

Her attire, despite being a teacher, is the school female uniform, almost the same as her students, consisting of a white collared blouse, black jacket, plaid skirt, black thigh-high socks, and penny loafers.

4. Akane Sakurada from Joukamachi no Dandelion

Akane is a teenage girl with an average build, though she is quite short. Akane has been noted to be flat-chested, but beautiful as well.

She is an anime girls with red hair that is waist-length, which she ties into low twin-tails with white ribbons at each side.

She inherited her mother’s face and eye shape, and she also has a similar hairstyle as her mother when she was in high school. She has red eyes, a fair and light complexion that is prone to blushing easily, and a petite frame.

Cthuko /Kūko is a main character in the non-yuri series “Haiyoru! Nyaruko-san!”. An ancient alien, who is obsessed with otaku culture and video games.

She possesses the power of Flames, and is also able to control Space CQC turrets at will and she is an anime girls with red hair.

She transfers to Mahiro’s school and takes the name Kūko Yasaka, Nyaruko’s “wife”, for their newlywed life will finally start at episode 3 of the first season.

No one will touch the Crawling Chaos without her permission

2. Shirayuki from Akagami no Shirayuki-hime

Shirayuki is rare anime girls with red hair colour attracts a lot of unwanted attention. At the beginning of the story, her long hair was typically tied in a ponytail that ran halfway down her back, but as an act of defiance against the self-absorbed Prince of Tanbarun, she cut it shorter so that it reached her chin.

Shirayuki is of average height at 5′ 4 (162 cm). She has clear emerald-green eyes which serve to complement the natural beauty of her hair colour.

Shortly after Shirayuki became a fully-fledged Royal Pharmacist her boss Garak gave her a double-breasted white uniform, which is styled to double as a lab coat and can be worn over her civilian attire.

Rias is a beautiful young woman with white skin, blue eyes (blue-green in the anime, season 1-3) inherited from her father, Zeoticus, and a buxom figure and she is an anime girls with red hair.

Her most distinctive feature is her long, beautiful crimson hair which she also inherited from her father, that reaches down to her thighs with a single hair strand (known in Japan as ahoge) sticking out from the top.

Her hair also has loose bangs covering her forehead and side bangs framing her face. Rias’ height is 172 cm. (5 feet 8 inches), making her one of the tallest female characters of the series. 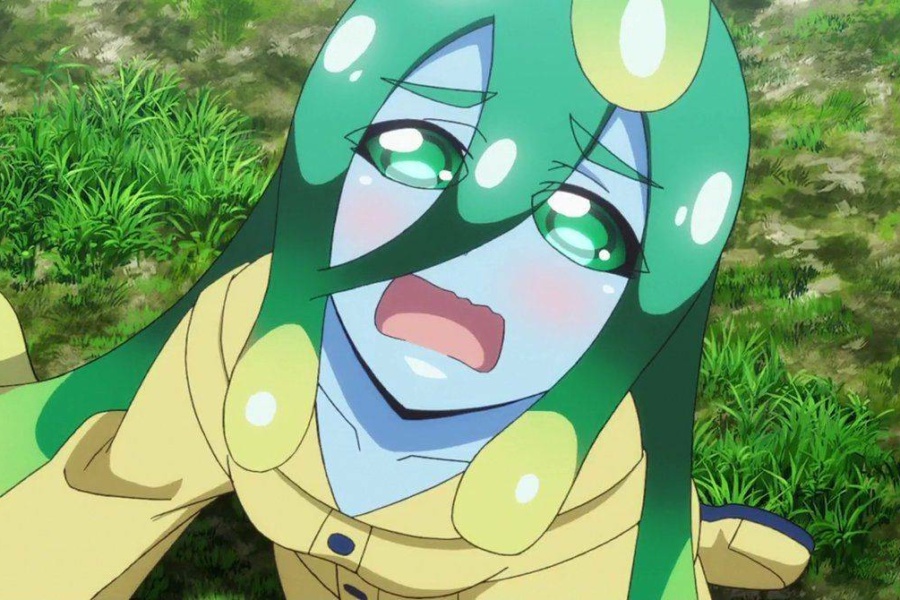