What do we love the most about anime?

Anime smiles are one of the most important parts of any anime and the series would be incomplete without these!

So, ,let’s count down through the best 18 anime smiles that breathe life back into us!

Psst! The Shounen protagonists took the cake in this one.

Let’s start off with one of most wholesome and cutest smiles that you’ll find in anime!

Naru is such an innocent child who is always full of life and cheerfulness and warmth!

This shows evidently in her smile.

Naru’s smile is bright as day, light as feather and warm as the sun!

She goes bringing up whirlwinds of trouble wither activities with her friends.

Her childish and unabashed smile makes you want to smile the same way she does, big bright and wide!

This ‘Shota’ type charater goes around with his favourite bunny, talking to girls and eating cake!

Haninozuka or ‘Honey-Senpai’ is a third-year at Ouran Host Club and his smile is to die for!

He might look very cute and fluffy and harmless with that smile of his, but don’t get deceived!

Honey is in fact a martial art expert as an heir of a very famous dojo!

Despite being portrayed as the most childish characters, Honey is easily one of the most mature characters of the series who is strict, understanding and often advices and encourages people to be themselves.

Lucy is often very expressive with her emotions.

She gets angry, frustrated and sad in very exaggerated ways.

Her smile, however used in a much more subtle way creates an impact in the series.

Lucy often smiles softly while talking about the things important to her like her books, fond memories and so on.

She overestimates her beauty and tries to use it to gain advantages like discounts and such.

Her soft smile often shows the hints of actual kindness hidden beneath all of her pride and vanity making it that much more special!

Tohru’s smile has worked magic in this series!

Finding out the secret of the Soumas?

Hiro insulting and belittling her?

Being stabbed by Akito?

Tohru has smiled through it all.

And not just the Souma’s!

Tohru’s smile has helped her friends Arisa and Hanajima, showing them consistence acceptance after their turbulent early experiences.

Her smile is kind and optimistic, one that makes you believe in tomorrow and gives you the strength to gather courage and work hard again!

It’s reassuring and makes you feel safe as it did with Kisa, creating an instant bond between the two.

Edward is a genius hacker going by the alias ‘Radical Edward’!

She is a mix of mad scientist, rebellious teen and a wild animal all together in a small cute pack!

Ed, despite her usual mannerisms, has a range of smiles on her face. .

She often has the regular smile that she wears when she just wants to be a part of something, even if she doesn’t understand it.

Her smile takes a more mischievous turn the moment she is able to get her hands on some technology and the better the technology or the security, the more malicious this smile becomes.

She also has a very innocent and cheerful smile that she usually shows off her teeth while she’s having fun with her partner, Ein.

The classic of a popular guy falling in love with a shy girl, Kimi Ni Todoke is a must watch romantic comedy purely for this smile.

Sawako had always been teased, shamed and shunned for her name and she has zero people skills.

The popular guy, Kazehaya, being the nice sweet and kind person he is, decides to change this and talks to Sawako.

Sawako slowly is able to break out of her shell as she admires and learns all the little things from him.

Her smile as she slowly and steadily gains more and more confidence and openness is a treat to watch throughout the series.

A mystery series regarding a 45-year old club room, Hyouka revolves around its club members.

Eru Chitanda has an insatiable curiosity and won’t take rest until this mystery is unravelled!

This smile instantly blooms on her face the moment she starts talking about anything she’s interested in like…well…mysteries.

Chitanda’s light-hearted fun smile adds a dimension to this series!

Tsukishima’s smile is probably the most versatile smile in the anime, going from cocky to pure happiness.

Every time we saw Tsukishima’s smile it had a different intonation to it.

He smiles in a perfect smirk while blocking, a very polite and formal smile for opponents and strangers and a fun one for when he enjoys the chaos!

Tsukishima used to smile more openly and innocently as a kid especially around his brother, but after the betrayal, his attitude took a turn for saltier!

He seemed like he would never want to give it his all, but being in Karasuno and around Hinata and Kageyama, his love for volleyball came through.

This was evident in his multiple smiles for multiple occasions!

Tsukishima’s best friend on the other hand has such a pure smile that it makes you root for him all the more!

His shy and bashful smile is also one to not miss out on, especially when his teammates are praising him!

Despite looking like an all-innocent good boy, Yamaguchi also has a much more mischievous smile that often tugs at his lips when Tsukki makes fun of someone.

His often shy and hard-working demeanour makes his smile worth so much more for everyone!

Yamaguchi is someone who wasn’t a genius or very good at anything particularly until he had his moment!

And boy, did he shine or what?!

Yamaguchi made a name for himself and a win for his team.

His joy knew no bounds and neither did his smile!

What makes Hirotaka’s smile so much better is the sheer rarity of it!

Hirotaka is mostly calm, thoughtful and lives his life with a straight face.

Narumi explains this as that his expressions can’t keep up with the pace of the conversation.

The only time Hirotaka has openly smiled or laughed on the show is not even during one of the episodes, but the bonus after the ending of the episode of the anime!

It is so easy to miss out on this beautiful smile that shows up only once.

However, this shows a very different side of the otherwise poker-faced Hirotaka.

It shows that he knows how to have fun and can laugh and smile about things just like everyone else.

It shows a side of Hirotaka that only Narumi can bring out, only they can enjoy together and this is what makes their relationship special!

Hirotaka’s smile is definitely a one hit wonder that cast it’s spell on all of us!

The Prince of the Ouran Host Club, it’s his time to shine!

Tamaki is the one who made the host club for ‘happiness of girls’.

His smiles range from cool and composed prince-like smiles to cute child-like smiles.

The ‘Lord’ of the host club has managed to charm everyone with his smiles no matter whether it is there to put a smile on your by saying cheesy romantic lines or an overjoyed one when Kyoya approves one of his plans or gives him some happy news.

7. Zero Two From Darling in the Franxx

This girl has made her mark in anime.

Being the best waifu for numerous fans in the community, Zero Two has a smile to match.

Given her position and backstory, her smile becomes all the more desirable and appealing to her fans!

She has an often shounen protagonist-esque grin on her face but can also sport a more feminine smile when she pleases.

No matter what anyone says, Zero Two’s smile has only made her that much more attractive to the fanbase!

He graced the audience with a beautiful smile in season 4 and we were head over heels for it!

Todoroki managed to light a fire among this entire community with just 2 minutes and 13 seconds of smiling!

That’s something worthy of praise!

His smile is open and hides nothing bringing along a cheerful liveliness along with it.

He has a mature and responsible smile when interacting with Zenintsu or Inousuke reminding us once again of his status as Nezuko’s elder brother and the eldest son of the family.

He also has a much more childish smile when he is genuinely happy that brings tugs to your heart, that in the end Tanjiro is also just a teenager.

Tanjiro’s smile is important as with every smile, he walks ahead from a sad past that haunts him.

Despite his lack of quirk and severe bullying, Izuku Midoriya is able to stay smiling in his life.

No matter his struggles and all the obstactles he had to face, Midoriya smiled through them all to welcome each new day with new vigour and a new smile.

It shortly became a characteristic of his even though it is easy to forget that Midoriya was born with no quirk and no potential to become a hero at all!

Looking at how far he has come, no wonder he is smiling.

Naruto smiled the brightest in the darkest moments.

Naruto is often the first introduction to the shounen protagonist grin.

Despite everything that he had to face, all the loneliness, misdirected hate, losing friends and teachers, Naruto in the end did stand up and smiled.

He accepted the hardships that come as a part of life, more so for him and smiled.

Smile himself and also gave everyone in the village to smile.

Naruto’s smile also settled into a more mature father-like smirk in the Boruto series which symbolizes the completion of his journey.

Natsu is relatively a simple-minded character.

All he knows is he wants to smile and he wants his friends to smile.

And he wants to fight! Obviously!

Natsu often along with his big grin also has a comical smile reserved for when he thinks something is awesome!

As a plus, he also has a creepy smile when he plans something evil and fun in his mind.

He also has a devilish smirk when someone puts up a good fight and when he is ‘fired up’ to fight against this enemy!

1. Monkey D. Luffy From One Piece

Races to the top seem to be this rubber boys forte!

Monkey D. Luffy has gone against the usual trend of having realistic smiles in anime as time progressed but Luffy retained his unusually large and wide grin, showing off his teeth and shining bright!

Luffy’s smile is as carefree as they get! It’s a symbol of hope and continuously moving forward believing in the good times.

Whether it’s getting nakama back, punching people up for practice, playing games, catching fish, or even responding to insults!

Luffy’s signature wide smile has saved so many days from darkness!

Add his signature laugh and we’re all set for our next adventure! 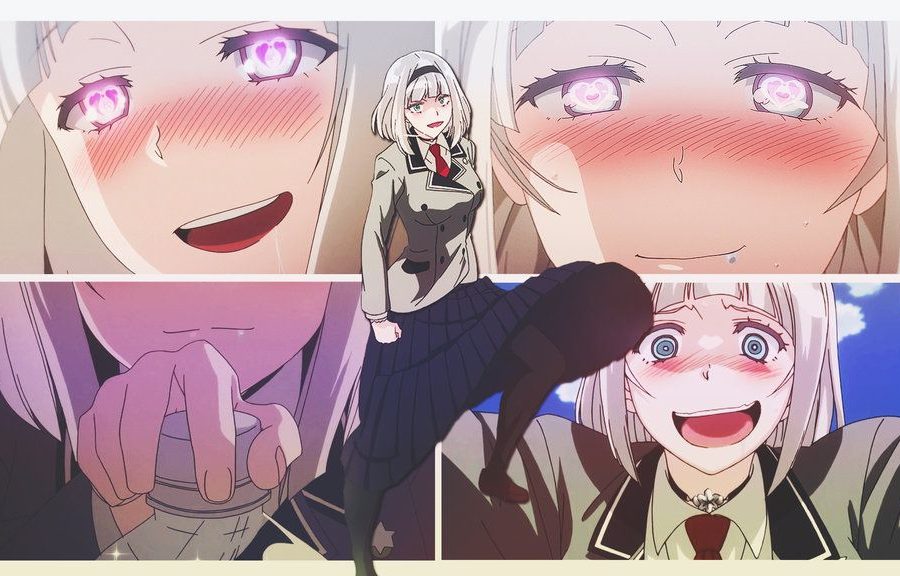