In the Naruto series, we have seen some of the most talented female characters, who have entertained us with their amazing techniques.

But skill was not all they had. Today, we will take a look at the most sexiest Naruto characters.

Some of the female Naruto fans are very familiar with the characters appearing on this list.

Although she isn’t as beautiful as the others, her beauty makes up for it with her superior athletic skills and hot body.

Hana Inuzuka took care of the medical needs of the other shinobis in Konoha.

Her body is tall and thin, with dark brown hair.

Her hair is kept in a ponytail, with two strands falling to her sides.

Two tattoos depict the InuzukaClan under her coal-black eyes.

Her traditional Konoha medical outfit is what she wears.

Apart from her high height, Pakura’s most distinguishing feature was her hairstyle.

It was tied in a big bun with the top half of the colour green and the bottom half of orange.

With a long needle, she keeps her hair in place.

Like Hana, she has large strands of long hair that fall on both sides of her face.

A backless top without sleeves was worn by her, as well as tight pants.

She also wore a pair of arm warmers to keep her arms covered and reach her shoulders.

Two of Guren’s most appealing features were her mysterious nature and sharp eyes.

Guren was proud of her own abilities and ashamed to be helped by others.

Her devotion to Orochimaru knew no bounds.

Red lipstick gleaming on her lips matched her pale skin and sky-blue hair.

She also has a very spiky hairstyle, so she puts it in a ponytail.

Her footwear consists of a pair of sandals and a green-coloured suit. boots.

She is one of the sexiest characters whose main strategy was to seduce her prey and kill them with a kiss.

Her technique was also named after her execution by Kiss.

Her perfect body and tall, tender figure made her dangerously attractive.

Her blue eyes and the beauty mark below her lips were easily visible. shinobis towards her.

Her usual outfit consisted of a dark qipao and dark boots.

Ameno had an incredibly calm and soothing look.

It was not fake.

Ameno was naturally compassionate and loved helping others whenever she could.

She was a great medical ninja and her dedication to saving lives is admirable.

Her long brown fair skin is complimented by her hair that covers her face to the sides.

Her eyes are the same colour as her hair and she wears her hair in a ponytail.

She also keeps her forehead protectors on her wrists.

There is no doubt that flashy people are attractive.

Minato Naturally, Kushina deserves to be ranked among the most popular girls in Naruto.

Kushina stood out from the rest with her bright red hair and blue eyes.

She was calm and collected, but she could lose her temper easily.

Her hair was untied, with a small pin on her right.

Kushina was a beautiful beauty that everyone knew about.

Mabui was a Shinobi with dark skin who hails from Kumogakure.

She was a good example of a woman who knew how to keep her cool in stressful situations.

Her light grey hair, which she kept in a bun behind the head, reflected her bright eyes.

Like most female characters, she also had two bangs that fell on her face.

Her style was simple, with long sleeves and sandals. She also liked large earrings.

Shizuka, a funny and cute girl who lives in the Nadeshiko Village.

She is known for being romantic and was touched by Naruto’s love for Sakura.

She is medium in height and has a curvy body.

The bangs that fall from her face frame her face beautifully, giving her a lovely look.

She wears a green kimono that matches her eyes.

However, on missions, she will be wearing her kunoichi uniform and a black forehead protector.

Samui is from the same village.

The bob is cut to reach her shoulders.

She is tall and has beautiful skin.

Her expression is often aloof and her blue eyes seem uninterested.

She wore a grey short dress and a grey skirt.

Her dark brown eyes have no pupils.

Anko is a Shinobi Academy teacher.

She helps Shinobis reaize their dreams by helping them up.

In her joyful personality, she shares a lot with Naruto.

She wore a mesh bodysuit that reached her legs.

She is medium in height and has a slim build.

Her spiky violet hair is pulled back in a ponytail.

She topped it off with an oversized light brown jacket and open shinobi sandals.

The beautiful Mizukage Mei Terumi is without doubt one of the most popular Naruto female characters.

She is also very romantic and dreams of marrying her perfect man.

She is a joyful and a good person who seeks to avoid conflict in all situations.

She is well-known for being very generous.

Her tall, thin frame is balanced by her long, auburn hair.

Her hair is kept in a ponytail at the top.

She wears a long, blue dress with high-heeled sandals.

Kurenai is a teacher at the Academy of Konohagakure.

She was Shino, Hinata and Kiba’s, mentor.

We saw her being extremely brave, as she didn’t falter in front of Itachi or attack him.

She was a motherly figure to her students and took excellent care of them.

Her skin is light with messy, dark hair.

She wore mesh armour and bandages around her arms, legs, and thighs. She also wore her traditional sandals and a headband protector.

Although Karin was annoying, she was one of Naruto’s sexiest girls.

She was a member of the same family as Naruto.

During their time together, she felt a special affection for Sasuke.

She wore a light-coloured dress most of the time.

The dress was accompanied by a pair of black shorts and long sandals that reached her thighs.

Konan is the sole member of Akatsuki.

Although she was the antagonist in the first parts of the series, she remained true to her values at the end and was praised by fans.

She was calm and followed stoicism in her daily life.

Her medium-bluish hair was untied, except for the parts where she used a paperclip ribbon to the side.

She wore her Akatsuki traditional outfit with a pair of sandals.

Shizune is the classic anime case – she is well ….not nearly as well as her peers, or her juniors.

Shizune is a charming character with a sweet face.

Her face is cute with her short, black hair which she lets go of.

She wears an armoured mesh top with a black kimono and open sandals.

And, she is not like others. shinobis don’t use a helmet when she goes on missions.

Sakura, despite being dubbed the most useless character by some fans over the years has shown remarkable character growth.

It speaks volumes about her beauty that Naruto was attracted to her from the beginning.

Her body is slimming pinkish Split hair into two parts from the middle.

This makes her fair skin shine with her shiny locks green eyes.

Her head protector is worn over her head.

She usually wears a red dress and pink shorts.

Since the beginning, Temari has been a sharp girl.

She is a beautiful girl with great fighting ability.

Her cute features are complemented by her wild spiky-blonde hair.

She is wearing a light-coloured dress purple dress with her head protector around her neck.

To keep the dress in place, she ties a red belt around to her waist and wears a pair of sandals.

Ino was the rival to Sakura.

Her long hair was a great compliment.

She had long hair, was considered to be the most beautiful of all the girls at the academy.

Ino was also a fashion guru and wore the right clothes.

The outfit she wore was a purple sleeveless dress with a high collar and a matching skirt.

Her bright blue eyes give off a sharp appearance and mesh armour protects her arms.

One of the most sexiest Naruto characters is one of three legendary ninjas.

Tsunade, despite being an old lady, has kept her beauty and attraction throughout the series.

As the Hokage, she performed her duties flawlessly and protected the village.

She is slightly chubby, with light skin and short – blonde hair.

The Hut Outfit includes a grey kimono over it, a green coat and dark pants with open sandals.

Naruto’s wife, Hinata, manages to get ahead of Tsunade to take first place on this list.

He began to notice her and eventually they got married.

All eyes were on her.

She wore a light purple jumper and a head protector around her neck during her time as a shinobi.

Her characteristic features were dark blue hair, white eyes and no pupils.

We’ll be back with another article. Continue browsing our content until then. 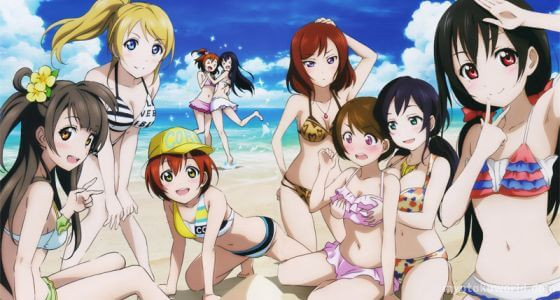 11 Sexy Anime Girls in Bikini of All Time